skip to main | skip to sidebar

So the 1st battle of the year. ~2000 points each on minimal scenery - *note to self buy more scenery* - but good fun none-the-less. Forgot my camera so all the photos r from cameraphones - will remember next time.
Russians: (BP 12)
1 CO (Cv9)
2 HQs (1CV7, 1 CV8)
1 BRM-1
6 Conscripts with RPG-16
3 BMP-1
3 BMP-2
6 T-72
1 BRDM, Spandrel
1 ZSu-23-4 (probably should include a second for future)
British: (BP 9)
1 CO (CV10)
1 HQ (CV9)
6 Regulars with Carl Gustavs
3 Spartans
3 Scimitars (Non-Recce)
3 Scorpions (Non-Recce)
2 Landrovers (Recce)
4 Chieftain Mark 9s
1 Lynx AH.1
2 4.2" Mortars
Turn 1
Russians start to advance steadily - mostly hidden from view from British until one of the T72 companies exposes itself to the view of CO and Chieftains.
Chieftains move forward to get in range but fail to fire, Scimitars race along road on left but the Scorpions fail to keep up. CO calls in Lynx but its driven off by the combined Air Defence of the HQs and the ZSU. British 0/9, Russians BP 0/12
Turn 2
Both Russian HQs fail to give any sort of orders, CO orders Spandrel to open up on Chieftains, suppressing one despite it successfully evading.
Chieftains see T72s firing and give rapid opportunity fire causing one to be suppressed.
British continue to advance on left but Scimitars deploy right in front of the 2nd T72 company [BOOM BOOM BOOM] byebye Scimitars!
Chieftains fire into the 1st T72 company destoying one and pushing another back.

Turn 3
Russians fail to do anything - at all! Chieftains continue to engage 1st T72 coy and also engage the Spandrel destroying the Spandrel and suppressing a T72.
British 3/9, Russians 2/12
Turn 4
2nd T72 Company engage Scorpions in woods destroying one. CO calls in the Lynx which finally gets to attack pouring both lots of attacks in getting 12 hits off 13 dice! Destroys another T72 from the 1st Company and the ZSU. Scorpions outflank T72s on right and destroy one - thts how to use them!
British 4/9, Russians 5/12
Turn 5
CV7 HQ finally orders the BMP1 company to move forward - yes 5 turns in! The remnants of the 1st T72 coy reinforce right - a lot of units are being pulled towards those woods. BMP2s deploy infantry in woods on left - where they will remain for rest of game - no way they could have advanced without being destroyed by the chieftains. Another Scorpion is destroyed by the T72s. British CO blunders urgh!!!! Very little effect as the pull back is possibly actually advantageous as the only thing in the open is the Chieftains.
British 5/9, Russians 5/12
Turn 6 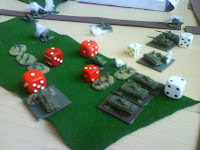 BMP2s try to dash to the right flank in an attempt to take the wood in the centre but Chieftains destroy 2 of them. Heavy mortar fire starts to rain down into the woods from the British. The remaing T72 from the 1st company destroys the remaining Scorpion. Looks like it could be over very quickly with all of the russians bearing down on the British infantry in the woods!
British 6/9, Russians 8/12

Turn 7
Russians all failed as did the British HQ, the British CO had no targets so no Helo, no mortars and no tank fire.
BP as above.
Turn 8
The 2nd T72 coy suppress landrovers and some of the British Infantry. Remaining BMP2 is destroyed by Carl Gustavs which also and suppress the BMP1s which have now joined the fray.
British 6/9, Russians 9/12
Turn 9
Russian Infantry coy start to advance through wood as British try to bug out boarding the Spartans but then fail to move away ("Tonight we dine in heck!!!). Those woods are really slowing down the game with most of the firing causing minimal damage.
British 6/9, Russians 9/12
Turn 10
One of the BMP1s fires at the Spartans suppressing one. T72 from 1st coy advances to edge of wood only to be suppressed by chieftains who are back in the game despite the outrageous amounts of smoke and explosions coming out of those woods.
Lynx attacks T72s suppressing one. The heavy mortar then somehow takes it out! Infantry in suppressed Spartan redeploy witht the other Spartans getting lots of movement and bugging out to the woods on the flank! 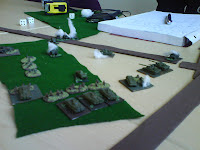 Turn 11
BMP1s keep advancing threatening the infantry. Infantry charge the british regulars and after two rounds drive the Brits back with both sides being left suppressed.
Chieftains cause a T72 to fall back into a friendly suppressed unit - gdbye! Spartan is blown up by T72s - its getting bloody in them there woods!
British 7/9, Russians 13/12
Turn 12 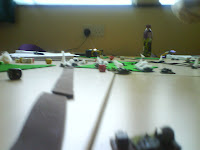 Russians survive morale role so the last turn was played. Conscripts again charge into regulars but are suppressed before they reach. BMP1s destroy a regular infantry platoon.
British call in the helo, the mortars and the Chieftains open up and despite the mortars killing off the last British regulars in the woods (BLUE on BLUE!) the destruction to the Russians is apalling! End of the game - phew!
British 9/9, Russians 16/12

Game is marginal victory to British in our eyes - the force was to crippled to go on the offensive and the Russians still held the woods in the centre with majority of their forces.
Points of View
British - Exposing Scimitars to T72s was foolish and ended in them being, well ended.
Chieftains had an excellent field of fire but it woud have been interesting if the T72s had of all attacked down the right as one. Infantry should have bugged out of the woods earlier.
Russians - the AA should have been placed more centrally to cover all angles of attack.
Although not the original plan the eventual push through the wood would have resulted in a better result if some kind of fire support was available as well as if the 2nd infantry company could have supported.
Need to buy some supports *Artillery, Aircraft, Engineers for the Russians
Posted by Jimniy at 7:06 AM